EFI PLUS 8: TO CHIP OF NOT TO CHIP..THAT IS THE QUESTION! by Lorne Goldman February 2012

It is only 8 months since eMog closed, yet the GoMoG and Morgan Wire inboxes are getting old questions that had become second nature. It would be a pity not to preserve all the hard-won knowledge in this area. One of these questions is whether to chip an EFI Plus 8, why and with what.

I am writing this quick guide to make it easier for those inquiries to be answered with a link here. These details here are gleaned from scores of eMog and personal experiences. Many of you already know me but for those that do not, I am an enthusiast and retiree with a love and deep working knowledge of Morgan Plus 8s. I do not sell products or have no interests with anyone who does.

A "chip" contains the inprinted fuel map that governs the functioning and personality of an EFI systems. If you are unfamiliar with EFI basics please read the articles on EFI. EFI Plus 8s came in a number of versions. We will deal with each as the need and effect of chipping varies with each. Also, please consult the relevant secions of the Workshop Manual, FLAPPERS, HOTWIRES and GEMS, for further help. The advantage of folowing this advice is that it has been tried and tested and has a large support lore now available for it amongst owners and dealers.

Contrary to the commonly held the belief, the largely analogue Flapper computer (aka the 4CU) does contain a chip (Ferranti). However, the system is largely analogue and though specilaized chips can be made (Mark Adams) for 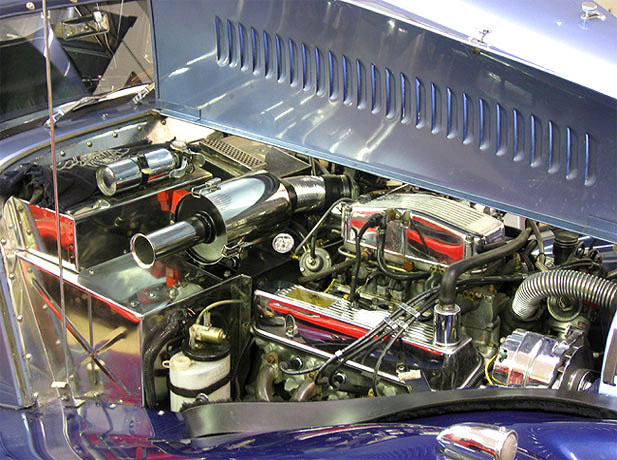 specialized engines and uses, it is not really worth the trouble IMHO. This mod can only be done by a specialist and chips are not sold for owner instalation for the Flappers. But you can have performance modified by enrichening and changing the fueling without the addition of a small control fuel pressure control. Top results can be obtained by installing an Adjustable Rising Rate Fuel Pressure Regulator and this will ultimately be more flexible.\

I have learned to love Bosch L-Jetronic 4CU flappers. They were the longest EFI system ever used in history, upped power over carbs by 50% on the same engines, and, unlike all later EFI makes and models, allow full interaction between, owner and his vehicle. Parts are relatively easy to find, (for me at least!).; I have used them to run 3.5s, a 3.9, a 4.6, and even a 5.0 liter LR V8 blocks. The dyno results have amazed me and they have carried me with nary a single towing for 250,000 miles and counting. We too often forget that David Hardcastle was right. EFI, after the Flappers, has been used to please politicians and manufacturers. Power-wise most of the happiness EFI produces is achieved by the finer, more combustible spray produced by the multiport injectors along with its capability in meeting all sorts of ambient conditions. The eproms follow the regulations passed by legislators and the later systems are manufacturer-made to keep YOUR HANDS OFF your own property. We are forced to get dumber

There are three models of the Flapper ECU used with Rover 3.5 engines in the mainstream years (1984-1990). They will all run a Flapper system, but one is better than others and this model was installed with Morgans (and TVR Wedges).

SERIAL # 83986 The ECU version used by the Morgan Flapper Plus 8s and other sports and competition cars. A Flat flueling profile that is good across the entire rev range.

This is/was an excellent and reliable system right from the box. (Though it can have a tendency to run a bit lean with the standard chip...especially with a K&N filter and an upgraded freer breathing exhaust system.) But there is no NEED to change this system. However, I have been astonished at the extra power possible with this model if one does so.

First of all some basics; the Hotwire computer is called the 14CUX. It comes with a variety of chips and also different versions of the computer itself. If you have a problem with the ECU, it is good to get the correct replacement computer to ensure proper Morgan performance. Morgan Plus 8s (and TVR  Chimaeras) use the AMR 2175.

The chip we have all settled on is the Optimax made by Mark Adams. It can be purchased directly from Mark or from Rpi. With all the Morgan interaction on this chip for many years, they are very familar with issues, if any, that can arise with a Plus 8. The Optrimax will sufficent for a 3.9L unless other, very deep modifications have been done to the engine.  If so, there is another version of the same chip called the Tornado (Hotwires) that has an extended top end. Not to worry, if you choose to do additional mods after buying the Optimax, it can be exchanged dfor a Tornado by simply returning the chip to Mark and paying the small difference in price. Either chip will cure any too lean fueling issues and imporving your power (especially in the all important mid-range) while improving your mileage.

There are other important decision to make here.

1. Do you want to keep your cats or not? Optimax and Tornado have cat and non-cat versions. (You should keep your oxygen (lambda) sensors with either decision.)

2. Do you want to switch to a twin exhaust system? Most Hotwire Plus 8s came with a single exhaust that is restrictive.

In most cases where I have helped people re-chip their Hotwires, I have simultaneously installed a twin exhaust system. The double whammy of the new chip and exhaust is remarkable, releasing a lot more power and response. The proper Morgan performance twin exhaust and branch manifolds from a Morgan aftermarket supplier will cost about 1300£. Ask if you want recommendations.

This was the first EFI Plus 8 where Morgan moved far away from the Land Rover standard setup. At first, the GEMS setup did not easily fit into the Plus 8 engine bay with sufficient clearance under the bonnet and Morgan decided to run the 4.6 with the Hotwire system. (With a few early exceptions, Land Rover 4.6s came standard with the GEMS or later Bosch Motronic systems.) Apparently, the fuel map they used for the 4.6 was the same as that destined for the concurrent 3.9 Plus 8s. The result was a reputation for running very lean with only 3-4 bhp more the 3.9, though with a bit more torque. These largest of Plus 8 engines run very HOT...with their larger capacity, uncomplimented with the appropriate amount of fuel.

Results with a Tornado chip (better than the Optimax for an engine of this capacity) installed are thankfully excellent. (They are available, again, from Mark Adams or Rpi. The car bhp jumps, fuel mileage improves and the engine runs cooler. IMHO, a new chip is an absolute necessity for the health of this model.

Here are the  Hotwire Variants.

Morgan had to stray even further from Land Rover stock with this one. There are two versions of the setup..one with a proprietary Morgan chip (overseas 4.0s from 1998 to 2000)  that is more potent the Land Rover stock chip used after after. Most of the detailed information anyone will need for the GEMS Plus 8s can be found in David Poole's excellent GEMS Manual off the GoMoG GEMS page.

Experience has shown that the compromises to programming the GEMS Plan 8s did not work out well. We all found that the problems and the anomlaies could be resolved by re-installing the missing knock sensors and replacing the two chips the system has with chips from Mark Adams. (Though these are not, per se, "Tornado" chips, the popularity and fame of his Hotwire solutions spilled over into the nomenclature of his GEMS chips.) Make sure you buy the right set.  Hotwire chips do nothing for a GEMS car.

If you have any further questions, contact the GoMoG webmaster