Automobile engine coolant systems provide a practical example of a liquid-thermal expansion problem. If the radiator is filled with coolant when the engine is cold, it will overflow when the engine heats during operation. In older Morgans, the excess fluid produced by the hot temperatures was released onto the ground. frequent checking of the coolant level and periodic replacement  is needed to avoid overheating on these cars. Many owners have retro fitted tanks.

Newer or updated cooling systems have a container (tank) that either;

1. collects the released fluid that occurs with thermal expansion in the pressurized system and returns it to the radiator as the engine cools after operation creating a vacuum and sucking the fluid back in through a valve in the cap (aka a RECOVERY TANK).

2. It is pressurized with the system and allows the fluid to expand into the container when the extra space is needed. (aka an EXPANSION TANK)

These designs both improve coolant systems and reduce the number of times the coolant fluid level must be checked (and avoids the expense of replacing costly antifreeze material mixed with the radiator fluid).

The biggest panic is at the start. People don't fill their cooling systems when their engines are hot, they fill them when their engines are cold..to the top. They start'em up, heat to running temp (a jump of 80C or so) and make puddles for a few days. It is unsettling and embarrassing but harmless (except to the environment).

How to install an overflow tank

An overflow tank is installed by finding a place to bolt or screw it to the inner fender of the car. The radiator overflow vent hose is then routed to the overflow tank and inserted into it. You will still need to keep an eye on the coolant level in the radiator and keep it topped up to ½” to 1” below the bottom of the filler neck.

How to install an expansion tank 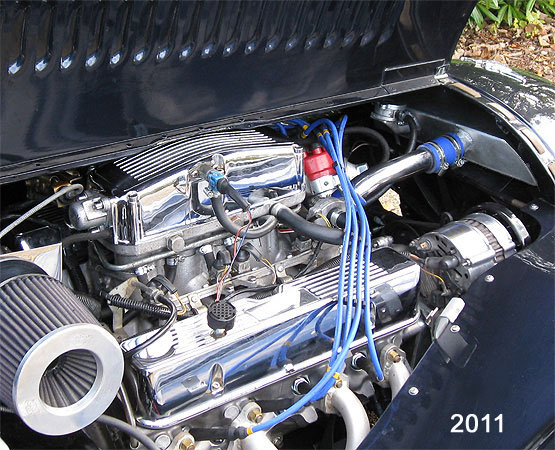 Cooling a big Plus 8
by Lorne Goldman on eMog

I think of a recovery or expansion tank (muchly different things) as a way of lessening the burden on the owner in checking coolant levels constantly (lest he run out) and/or preparing the car for a wider range of encountered temperatures. In our case, ambient temps vary widely in a single trip. -10C to +40C (50C) is not unusual.  Engine temperature are also a function of bhp. The more you have the more heat your engine will produce under load. It is one of the penalties it pays for being puissant. I have Plus 8s (4.6 and 4.8 on cams) After many years of trying I have found a happy recipe for all-weather cooling.

1. A bigger more efficient rad. I am not enthralled with those with a deeper core or many more fins. My experience of that is that they make it harder for a good air flow to pass through and too much gets deflected. The newest Mulberry rads are ideal. Longer and thinner. That means a bigger rad without prejudicing airflow and leaving plenty of room for a ...

2. Big fan. Something that pulls a LOT of air. I use a SPAL. So does the Factory. They pull an immense amount of air for their diameter, a must in a Morgan. Take care in the installation, the right SPAL can pull as much as 20+ amps and will require an MUCHLY UPGRADED 30 amp inline fuse, a relay and an alternate power connection (as the Morgan wiring is not rated that high, the wires can burn. Install separate wiring for the power and take the current from the alternator to the power side of the relay).


3. Big expansion tank, 1.5 liters. (I like expansion better than recovery, less complicated, a bit more fluid in the system and easier to work with when the engine is hot.  I have a Mulberry on one car and a Jeg's on the other. I do not shirk on size. They are both large (1 to 1.5 liters) The Mulberry is canted at the bottom so that it sits vertically on the Morgan bulkhead.

These combos gets us through absolutely anything without a problem.

Notes for a Triumph Plus 4

Secondly, if you look at the radiator, there is quite a large air space above the highest level that you can fill through the filler.  This is the problem.

As the car gets warm, the air and expands and forces water and air out of the overflow.  When the car cools, AIR is sucked back into the radiator.  This creates a positive feedback effect and after a few cycles, there is not enough water left in the radiator to cool the engine.  Overheating.

There are two cures for this.

1.  Check the water lever EVERY time the car is used (and watch your car pee on the pavement when you stop).