- The 3.9 block has provisions like the 4.0/4.6 litre for the very welcome cross-bolts but they have not been drilled.

- Because of the way the fueling and ignition is set up,  the standard LR 4.0 has knock sensors and the 3.9 does not. However, the MMC systemremoves the knock sesnors, forcing the ignition to "fly blind".

If you know of other differences please send them in to keep the page current.

Experience seems to show that, when in doubt, the US Plus 8s (4.0 1998-2002) NAS SAGEM fueling system ECU (computer) will revert to a default setting. Like most default setting, the car will be protected for a presumably a short period by running very rich. There will be a smell from the cats of rotten eggs and the car will react poorly with a bad idle and sluggish performance.

Many things can produce this state...a prolonged non-use of the car..a lack of power to the ECU or overfilling the petrol tank.

In such a case with these symptoms, the ECU must be reprogrammed to run properly again. TRhis is a simple matter if you know the setting and you have access to a LR dealer or specialsit with wither TESTBOOK (the LR diagnostic and prgramming serrvice unit) or Rovercom, an aftermarket item that does the same thing.

Unlike other LR units, the Morgan is reprogrammable and you will have to tell the experienced mechanic with the diagnostic unit mentioned to use the disk for "1997 Range Rover GEMS 4.0L UK Manual Type 1 ID 9660". Once re-programmed to that specification, the car should run perfectly again.

I was just contacted by an UK mogger I like very much. Puzzled, he has asked a question that I haven't dealt with in years. The Morgan cogniescenti has largely withdrawn from view in the last decade and much has been forgotten.  People should know as much as is possible about their beloved cars.

His question arose from confusion on Morgan blocks numbers and the Morgan 4.6s.This is very understandable as for a period (1997-2000) Morgan simultaneously produced Plus 8s with two different generations of original LR V8 blocks/heads and fueling systems (the then already obsolete 3.9s with Hotwire fueling for the UK and the more advanced 4.0 blocks with 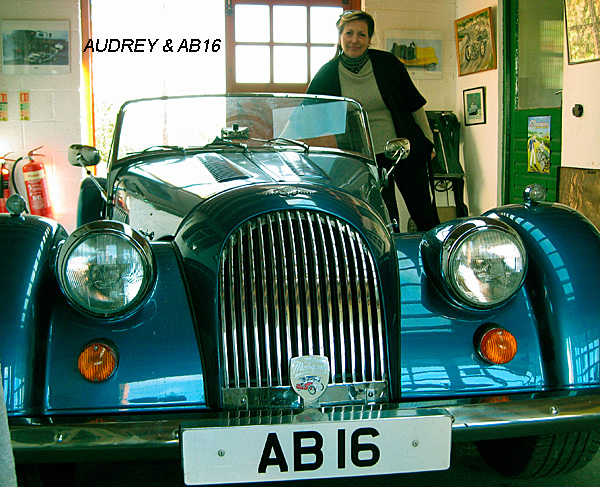 GEMS fueling for overseas distribution). This ended in 2000 when Morgan went to GEMS for all Plus 8s.

There were many reasons for this given by the company, few of them credible. For example, at the time the UK market was told that the later GEMS system or later the Land Rover Bosch Motronic system "would not fit under the Morgan bonnet!", which didn't make sense considering the hundreds of GEMS Plus 8s supplied overseas. The simple truth, I suspect, was that GEMS and MOTRONIC were more expensive for Morgan than the older Hitachi Hotwire systems and British law allowed the local sale of 3.9s until 2000. That being said, engine fiddlers like me and top tuners prefer the Hotwire for a number of reasons. It certainly allows for easier upgrades and owner intervention than the later GEMS!  (Though no Morgan EFI system is as easy to take care of, adapt and part source than the L-Jetronics (flappers).

But another problem appeared for Morgan.

By 1996, news had come of the production of the anticipated 4.6 version of the venerable Buick/ Rover/LR blocks. Every fan of Land Rover and the other marques using the block were excited. The 4.2, never used in a Factory Plus 8,  had largely been a disappointment and the 4.0 and 4.6 went much further, with cross-bolting and other features. And this was before the infamous plague of Land Rover V8 block cracking and slipped liners had begun in earnest. (With the low Morgan weight, this was not a problem for us.)

So Morgan had a goodly number of 4.6s on order in anticipation, at a premium price. Even Peter Morgan put his order in for one to be his personal car, AB16! It was also to have the newer "wide body" with the new Superform wings (much wider than anything contemplated in prior Plus 8 history). Problem is, everyone wanted the 4.6 in their truck when it appeared and Land Rover couldn't deliver to Morgan. I believem (unconfirmed) that the problem was the scarcity of the new GEMS fueling system, not the block.

But Morgan came up with a solution to save those sales. They went to John Eales. John should need no introduction to Plus 8ers. He deals in race preparation and supply of LR engines. Morgan asked Eales to supply new 4.6 blocks, modified and fit with 3.9 Hotwire top ends and fueling systems. (With a bit of modification parts, all blocks from 1976 can be retro-fit with earlier or later systems.) So now they had bigger 4.6 blocks fit with earlier fueling systems made for 3.9s!

Here is the Morgan announcement that was sent to me. It is confusing and inaccurate, indicating the state of the company management technological understanding at the time. I ask the reader to overlook these errors.

Of course, logic dictates that  one cannot get much more horsepower by providing the same amount of fuel to a larger bore engine, EVERYTHING ELSE being equal. In fact, the combination MUST run lean and hot as you are feeding a larger combustion chamber with the same amount of fuel! And the later 3.9 Hotwires already run too lean as stock! In fact, if you examine the figures given by Morgan, they show a mere 1.8% increase in bhp over the 3.9L block of the day albeit the 4.6 had a 2500 GBP price premium which sadly produce bragging rights only in its Morgan version. More than twenty years ago, John Eales told me he tried hard to get Morgan to allow him to create or provide them with a more appropriate chip/eprom (aka fuel map) which would release the extra power eveyone assumed would result from the bigger block and keep the motor problem free. Land Rover, with merely their stock 4.6 fueling and a truck 4x4 cam produces 30 more bhp (almost 20%!) with the same engine. However, a more appropriate chip was refused by Morgan, either for reasons of economy or perhaps worries about a need to re-test the engine for emissions. In any event, it was never done. Sadly, this also came at time when the fueling was already as lean as the fuel map of the 3.9 could be made to provide. This was why LR was transitioning to the GEMS and then MOTRONICS at the time. Additionally, owners would soon compound the lean fuel mixture with K&N air filters and performance exhaust systems. The lean mixture is unhealthy for the engine.

The MMC 4.6s (aside from some overseas 4.6 GEMS units) overheat. Many owners, internet savvy and former eMog adherents have addressed the issue. Owners adopt the new they-all-do-that attitude of the current Morgan community. :(

I have a number of Buick, Rover and Land Rover V8s in spares. I enjoy them all, as they all give the Plus 8 a different personality. But after more tha 225,000 miles, two continents and more than 25 years, I unabashedly admit to loving the 4.6 variants more than all others in Plus 8 history. They can be made infinitely owner friendly, with the best Morgan touring engine ever as they are super flexible. Roadside mechanics are familar with them on all continents. The mistakes Morgan made with their UK 4.6s are tragic. However, they are easy to sort. Sadly, the current community is no longer as mechanically adept as it was and who can recognize inadequate fueling without an exhaust analysis and a basis for comparison? Owners are unaware of the issues and all good drivers unconciously adapt their driving to what they got. The increased capacity indicates that the 4.6 MUST be more powerful so everyone assumes it. Yet it is merely another problem Morgan waiting for the right owner to ask the right questions and act upon the right answers. It would be a shock for these owners to see what that engine can really do..assuming it is undamaged after a decade of incorrect fueling.

These cars are easy enough to recognize. UK 4.6s, and their block numbers do not indicate a made-for-Morgan origin. John (Eales) would have their source and numbers but it would be unkind to place him in a conflict that is not of his making. He is a good guy.