I have reports that the 14 bolt Rover engine Cylinder heads have a special design fault in its heads. 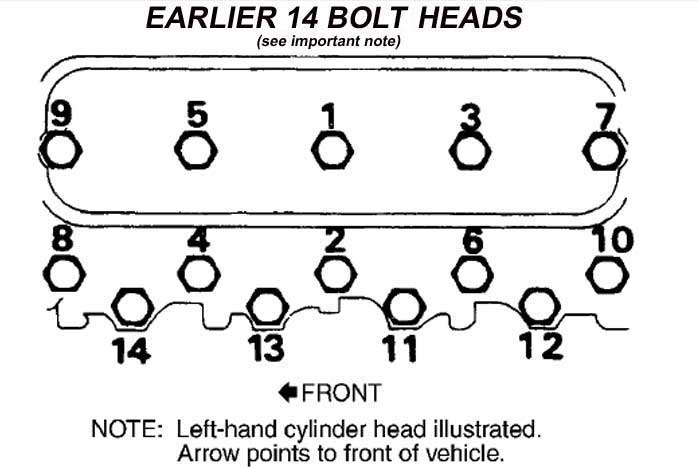 The heads are held on by 14 bolts. The problem lies in the bolts 11-14. When they get tightened they put an load on the upper bolts, cantelevering the heads by a slight amount. New engines are tight but as the engine gets older this allows hot gasses to enter the engine, oil and water galleys. This normally occurs only when high pressures = high load is applied on the engine, but it can happen at any time. Those hot gasses do all sort of mess inside:

1.  They heat up the water as they are expelling the hottest gasses the engine produces (from the combustion chamber) directly into the coolant. Even a small amount rises coolant temp dramatically. As this occurs only under load it's difficult to diagnose. Once you stop, the temperature drops.

2.  They are also responsible for oil leaks. Oil is pressed out by almost any seal as the vents can't take that much. Hard to find.

3. They make black sludge as they burn the oil. This sludge prevents the camshaft from being lubricated. Lobes wear off and power drops.

4. A good indication of this blow-by is that the valley gasket bulges as it's pushed up by the pressure. This huge h=gasket is not something someone regularly looks at. You can see this plate from front or rear under the intake manifold.

All pre 1993/94 V8's with the 14 bolt heads (yes that's all of them) have this problem to some degree, Its not maybe causing a big problem (or so you think) but it is steadily killing of the detergent's in your oil. Older engines seem to suffer more, as they usually get less frequent Oil changes though they actually need far more. The secret of the correct oil change interval, is not at 3000 or 5000 miles, but when the oil is visibly contaminated and no longer able to do its job efficiently. Most owners do not realize that the quality and detergent level of an oil are actually far more important then its viscosity for this engine. A "reputable oil" changed often is far better for your engine than far more expensive synthetic oils that are changed less frequently.

All post-96 Rover V8 engine's no longer have the outer 4 head bolts on each bank, this is what the engine has always needed to avoid what seemed to be a regular need for head haskets, but it took Rover 25 years to realize this. Here is what you can do.

1. Do Nothing, Well Rover got away with it for 25 years. Its a far off long term problem on new engines BUT it is an immediate problem on all pre 96 used medium to high mileage engines, of all assumed conditions.

2. Use conventional Tin (Shim Steel ) Gaskets "To retain compression ratio," This is actually better  than it may seem, you should re-install silly outer 4 offending bolts but torque them to only 20-25ft/lb. so they fill the hole but have no detrimental effect, this is generally the best option if  your "Head and Block" faces are new or near perfect order and the fault has yet to destroy you head gaskets.

3. Fit Composite Gaskets, This is the surest way of getting the best head gasket seal, but unlike the above options, it will lower the compression ratio by a factor of about 0.6-1. That will lower your bhp by 15%. (ugh!) Composite gaskets should also be considered when ultimate reliability is far more important when power is not important to the owner. In fact, doing the opposite, changing to tin head gaskets with a post-1996 Morgan will produce an extra 10% bhp. You see the later heads were skimmed to compensate for the thicker composit gaskets.

Buick 215s and 3.5L Rover/LR V8s (all blocks from 1962-1990) had different bores from blocks made afterwards. Click here BORES
Tin gaskets were used on all these blocks. Composite Gaskets have been retro-made for 3.5s but these will lower your compression, while giving you a more reliable gaskets. Composite gaskets give a better seal and a longer life.


REMOVING YOUR CATS
by Lorne Goldman

Many post 1990's Plus 8ers have gone to their dealers with an urge for more power. Often enough, the suggestion is to remove their catalytic converter and replace it with a straight through stainless pipe. Frequently, this is sold with a very expensive stainless exhaust system. Most often the resulting performance is a huge disappointment with the car operating poorly on acceleration and also smelling of petrol. The victim re-installs parts of the old system with no gain whatsoever and a large loss to their pocket. What is wanting is 15 minutes and a 10 pound part.

You have to first understand that the hotwire fuelling system used through most of the 90's went through a number of modifications. Each time once of these occurred a "patch" found to adapt the system to  added-on items. The old systems are still inherent in the each later one. This is not uncommon with many EFI systems...for example the 1980 California TR8 lambda circuit was still found in the 1989 flapper system though it wasn't used in the UK.

In the case of the 1990 "cat" cars, a special set of resistors were installed in the wiring loom to allow the cats to work and have their data properly assimilated into the ECU (and its resulting signals to the  injectors). If you feel along the wiring loom, you will come to a "lump"..that is it!.

If you uncover this lump carefully you will find it has a plastic cover. The colour of this cover is of paramount importance! If it is white, it is the original that came with the car. If you have removed your cats and that is the colour it is a big error.  It must be changed to the green plastic covered one (10 pounds at any LR supplier) when your cats were removed. (It is easy to confirm by checking whether the loom has been opened up.) If it hasn't you have your answer and if it has reopen it at the same place and see what colour plastic you find.

The green covered one allows the ECU to effectively ignore the missing cats system. With it, the fuelling system and the car should operate properly and (more robustly) and with a good sound. If the item has not been changed, then the input to the ECU will interpreted by the programming as the presence of engine problem and it will revert to a default setting programmed for cases of engine danger. This special  setting protects the engine by making it run super rich....not unreasonable decision in that an engine running rich when under stress is safer than any way.

When super rich, the engine will sound deeply loud and sluggish and smell of fuel and oil (running very dirty). You will lose much of your acceleration and "pep" but you can safely rev higher. Your gas mileage will be much worse. Sound familiar?

Here is more on the subject...look at the section on the Tune Resistor. 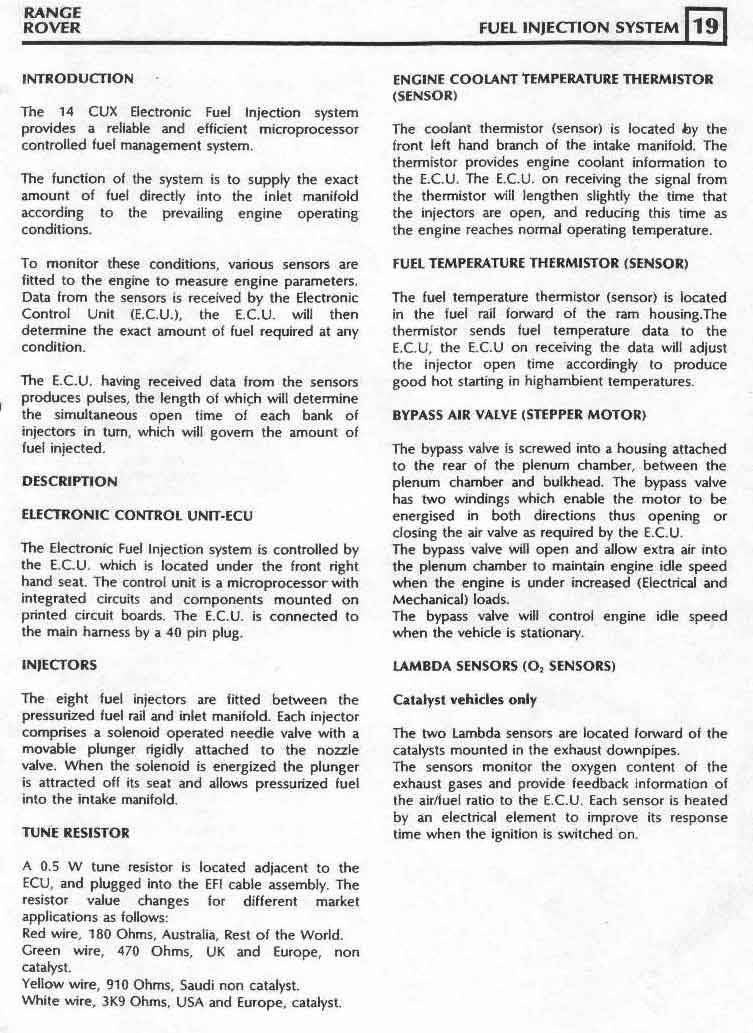 Plus 8 Water Pump
by Lorne Goldman

The Plus 8 water pumps have a small hole just under the shaft on their front bottoms. If you see it wet or dripping antifreeze, that indicates the bearing/seal is about to go.  Noise is another indicator of water pump sadness. The easiest way of determining whether the pump is to blame is to remove the fan belt and run the car for a minute. If the noise disappears the water pump or fan belt is the culprit. If your fan belt is not in fine fettle (examine it very carefully for tiny cracks or flaws while it is off) that can cause a squeak or sad issues.  If it has been over tightened..the pump will become damaged sooner or later (mostly sooner). If the water pump shaft bush has become worn it will either leak or cant the fan just slightly and then one blade will rub against the face of the timing cover to which the pump is attached and that will make a "rhythmic squeak".

Morgans do not need the viscous pump that would normally have come with our engines because they do not use the mechanical rad fan attached to the water pump as do others users of the same V8...we have no room for that fan and that is why Morgans use an electrical fan instead. Even with the non-viscous pumps the nose must be cut down to clear the cross-bar. With the right equipment and man, it takes less than a minute to cut the nose down...(one has to be careful not to burn the pump as the nose moves with the blades).

At the time of this re-writing (2014) the right pumps can be had off ebay.co.uk for the Plus 8s from 1976 to 1999 (or 1996 for overseas Plus 8) for 30£ and up. Water pumps for earlier Plus 8s are better had from the Buick 215 market in the USA, notably TA Performance  (175$)  or from $25 and up new on ebay.com from many aftermarket companies. It can be a big mistake to try to source these earlier pumps in the UK. In fact, in the USA, the water pumps, the oil pumps and even the timing covers kept improving long after the Buick 215 became the Rover V8.

For removing and installing it, (aside from the customary need of triple jointed munchkin fingers) some of you will find clearance issues that will appear to prevent you from taking the pump off without removing the engine. For these cars remember to loosen or remove the pulley for removal and to put it on loosely before you re-install it. Lightly coat the bolts with silicone (aka RTV aka Hylomar).

If you forget the pulley, you will either have to remove the pump again or push the engine back on its mountings with largish neighbours and a steel bar. As well, some of you will find that the longer bolts may not clear the crossframe. You can either try the steel bar, jack the engine under the sump or loosen some of bolts securing the engine mounts. I have used all these methods on MANY Plus 8s and never been stymied yet.

Morgan 3.9/4.0 Issue with the MAS
by Lorne Goldman

The 3.9 Hotwire Injection System has a tricky little issue more commonly found in its Morgan configuration than any other. It can drive the best batty and force the expenditure of huge sums fruitlessly. In helping some fellow Plus 8er out, I ran across it in a lengthy diagnosis using some of the testing procedures found on this site and the Autodata Mechanic Worksheets. I have since ran across it in two GEMS cars.

It is absolutely imperative that the MAS (Mass Airflow Sensor) NOT be grounded (earthed) to the car. Its bracketry will normally prevent this but its placement on a Morgan can easily circumvent the best laid plans of mice and Morgan. If the MAS is grounded, it will give aberrant readings and the ECU cannot successfully operate the engine. You see, Morgan places the MAS next to the heater and its hoses on the bulkhead. The hoses used by Morgan and leading to the heater have a high carbon content and, if they touch the meter, they ground it.

Symptoms can range from the car stalling or not starting or  racing at 2000 rpm + continually with or without an ineffective throttle.

If you are in doubt, simple test the MAS with your multimeter to check if grounded. If it is, simply change the hoses for higher quality non-conductive hoses or silicone or find whatever else is grounding it..