This article is a beginning of amalgam of articles and experiences with older Morgans and newer unleaded fuels. It will grow as data is accumulated. Is there a danger of running your Morgan car on unleaded fuel? For many models there is no danger at all,  however to others, there is a real danger of damaging your engine.

Lead has a lubricating  property, when you remove the lead friction is greater, thus  increasing the temperature. Abnormally high temperatures in  the combustion chamber cause valves and seats to erode. When running on unleaded exhaust valves and seats are  exposed to higher temperatures for longer, so any measures  that lower the temperature are worthwhile. Keeping the cooling system in good condition is one obvious measure,  you could also raise the final drive ratio helping to lower the  revs. Even on engines that are the most vulnerable running them below 3,000rpm will cause very little seat recession.

Don`t believe that all cars over 20 years old require thousands of dollars to convert them to unleaded fuel. Many cars need no conversion. If your car must be converted then calculate $200-300 for a four cylinder, overhead valve unit. If you have a complex V8 then it could cost you upto $5000 but the necessity for this is highly unlikely.

If work is required, plan it in conjunction with an engine rebuild. It is essential that the work is done diligently, poor work can wreck a precious old engine.

Many engines with average compression ratios (below 9.5:1) will run on 95 octane unleaded without problems with pinking. There can be great differences between identical power units, some are quite happy, others pink badly.

If you still want to use unleaded and pinking is a problem try retarding the ignition by 1deg at a time, until pinking disappears. On EFI units,  then the ECU chip may need reprogramming or replacement. Retardation of the ignition timing has the undesirable effect of making the engine run hotter, also the engine can run-on, especialy high compression engines designed originaly for `five-star` fuel.

On older engines designed to run on very low octane fuels it can be benificial to advance the timing, again make adjustments in 1 degree increments, ensuring that pinking does not occur and the engine runs smoothly. By retarding the ignition this can reduce the running temperature of the engine, reducing the risk of valve and seat damage.

There are a number of products on the market that claim to enable trouble free running on unleaded, often with other claims of better fuel consumption etc. They also claim that the engine runs at a lower temperature thus helping the life of the engine. However there is much scepticism regarding their effectiveness and how they work in practice. The testimonials quoted have no scientific bases and sometime are on cars that would happily run on unleaded fuel anyway. Independent tests have found them wanting.

On some cars only a complete engineering solution will do, installing hardened valve seats, higher specification valves and valve guides. The cylinder head or block in the case of sidevale units, needs to be in sound condition, with no cracks and sufficient depth of metal around critical areas around valve seats.

Aluminium cylinder heads are not automatically unleaded compatible, with materials varying between apparently identical power units. Birco, manufacturer of valve seat inserts for the British Motor industry, confirms that all inserts that it has made since the Second World War are technically hard enough to tolerate unleaded petrol, though modern inserts are considerably harder.

Opinions vary over the best route to take with valve guides. Most advise replacing the guides for both inlet and exhaust, although in the case of valves and seats only the hotter running exhaust items need to be replaced. The experience with phospher bronze guides is that the have a limited life of as little as 10,000 to 15,000 miles.

To find out what you need to do to your car see the models below.

Sidevalve, pre-crossflow OHV, crossflow engines.  Experiences vary between individual engines; some appear to run without modifications, but others suffer from rapid seat recession. For continuous running on unleaded, higher-specification valve seats are recommended plus, usually, valves (standard specification usually OK) and guides (which MUST be in perfect condition). Slight retardation of ignition may be required on higher-compression models.

1988-90: Engines have harder valve seats and may be OK without mods.

CVH engines to 1986: Can be fitted with later heads, which are fully unleaded-compatible.

The `official` advice is that all Triumphs require higher-spec valve seats, valves and new guides. Upgraded fuel-injection equipment is also available for PI engines. That said, owners have been running Heralds, Vitesses and 2.5PI models for several years in hard use, with no apparent problems so far.

Advice varies; some say fit higher-spec valve seats and valves, plus new guides, but some long established specialists have found that Rover V8s do not readily burn valves/seats on unleaded.

A TIRED CAMSHAFT AND LIFTERS

There is nothing that will sap power and performance more than a poor camshaft and lifters. The distributer, the carbs or the ECU may be the "brains" of the motor and the crankshaft its muscle but the camshaft is its heart and the lifters (cam followers) its arteries. If they are not in perfect or near perfect condition, good steady performance is iompossible. 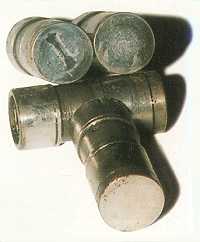 Here is a picture of worn lifters or cam followers Anything except a very slight depolish of the contact
surfaces is unacceptable. These lifters shown are NOT acceptable. 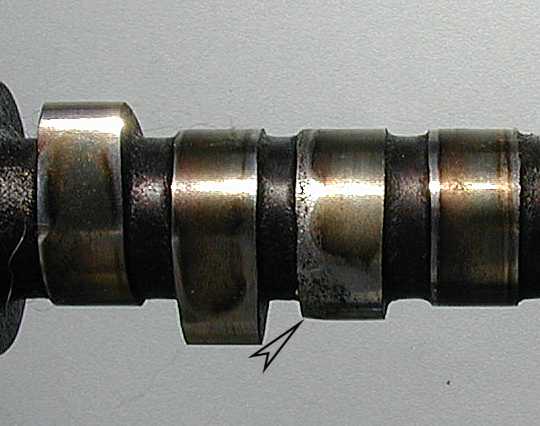 Below right:
Look at those  lobes. The
arrow indicates the edge
where the follower rode on.
A SINGLE damaged lobe
like this makes a cam fit for
the scrapbin not your car..