"Should I upgrade my brakes"  Common question at most Morgan events or the GoMoG help Line for owners of older Morgans. Yet these cars had excellent brakes by the standard of their day and with their low weight, Morgans don't need much braking.  However, there is a element that may point to a need for a SAFER brake system.

Most Morgans made before the 1970 will have single (piston) master cylinders (MC). A leak in that systems brake plumbing (not uncommon with any system), happening anywhere on the car, can render these brakes completely inoperable, leaving one to rely on the Morgan hand brake and luck. If you have one of these earlier cars,
upgrading to a tandem master cylinder is very wise. You see a tandem master cylinder has TWO (not one) two pistons operating in tandem (one after another) in a common piston chmber and bore as shown in the diagrams.

N.B. In rear wheel drive cars (Morgans) the piston and its MC outlet that's located closer to the pedal  (piston 1) activates the front brakes. The fluid pressured by this piston (1) also causes the movement of  a second piston (piston 2). (Piston 2 applies the cars rear brakes).

The diagrams show how tandem master cylinders will isolate the effect of a leak to the subsystem (front or rear) it appears in.

A LEAK IN THE FRONT  will not affect rear brakes and  a leak at the rear will not affect front brakes. As can be seen from the first diagram, if a leak develops in the front brake system,  piston 1 will move forward until it contacts Piston 2 (and its seal which isolates the hydraulic effect). Force from the brake pedal will be transmitted mechanically to piston 2 via piston 1. Braking performance will be compromised, but the rear brakes will still be functional. The pedal will need to travel further than normal to fully engage the rear brakes. Braking will be difficult iof only the rears are working but at least you HAVE brakes.

A LEAK IN THE REAR will cause piston 2 to move forward until it contacts the closed end of the master cylinder housing at the very front. When this make piston 2 immobile, all the pressure of fluid between the two pistons will naturally be applied to the front brakes. Again, overall braking will be compromised, but the front brakes will still be functional providing the extra pedal travel is available. In other owrds, the pedal will need to travel further than normal to fully engage the front brakes. Many inattentive or inexperienced drivers will simply continue driving without rear brakes functioning despite longer pedal travel and longer stopping distances. It is for this reason that cars are fitted with the brake failure warning light which detects a loss of brake fluid at the reservoir.

To update from a single to tandem brake master cylinder, one can try to source the .75" bore Girling unit used from the 1970s to 1993. This will be very diffiuclt as the unit is obsolte now and no longer in prduction. When they WERE available before 2004, they were very dear, sold by the MMC for 335£ ($550 USD) each. However, there are alternatives. The .75 bore seems to be a happy compromise but it is bigger than the earlier single master.  The larger diameter piston displaces more fluid per unit of travel so less pedal travel will be required to create the same effect at the wheels. Pedal effort will also be greater for the same effect.  However, so far, no one doing a swap to .75" has been unhappy with the difference. If brake effort is a problem, owners can consider the present MMC master cylinder with its integrated booster. 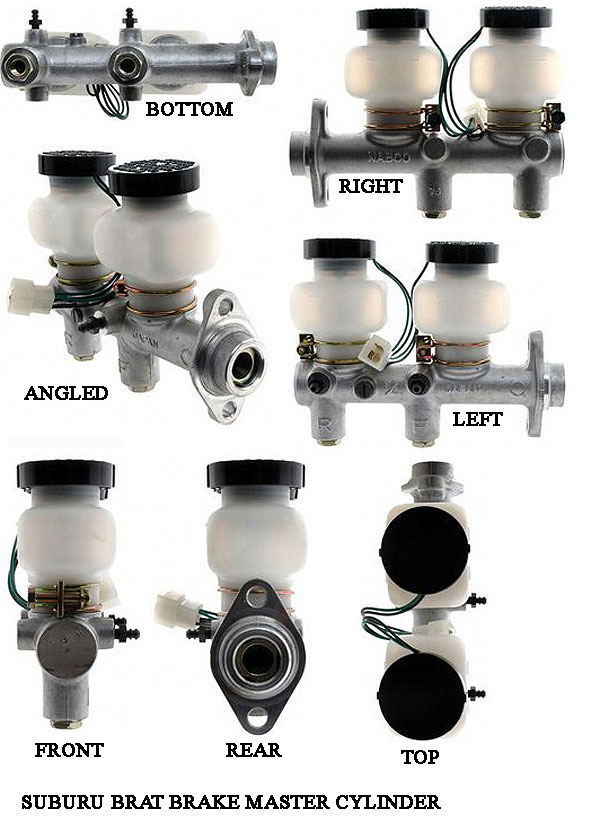 Many with single master cylinders have switched, for safety reason, to Dual Masters. Sadly, the Girling unit used by Morgan from 1978 to 1993, is no longer available and was very expensive when it was. One option that has been tried and tested by many is the one used in the Subaru "BRAT" (aka the SHIFTER in the UK or the BRUMBY in Australia). It will require adapters and a bit of curving of the brake tubing and possibly relieving the entry hole into the car a bit but it is a close match to the Girling and much cheaper new. It was used on the following vehicles