FOREWORD
I have now run across three instances of a bad condenser or ballast resistor in Morgans up to the point their ignitition systems began to use coil packs (circa 1996-2002 from a faulty memory). If I am noticing that fault cropping up..it is the time for an article. It is very difficult to diagnose. The symtoms are varied:
1. The car can run for 20 minutes or so, but then stalls, Only restarting after a rest. if you are lucky This is because the coil is overheated and its internal oil is boiling.
2. The car will run unsteadily. This is because;
a: The lack of one (ballast resistor or condensor/capacitor causes a too high voltage to run through the coil and the distributor, damaging the coil (which will become EXTREMELY HOT) and the distributor cap
3. The car will overheat.

A Ballast Resistor is an electrical device that reduces voltage to the coil so that more energy is available for the spark plugs during starting. Its resistance increases as current flows through it is increased and its resistance reduces as current flows through it drops. As a result, a device that helps to preserve voltage stability. This added stability increases ignition and running stability. Additionally, their usage reduces the chances of coil failure by reducing coil voltage and current, ensuring that the coil does not overheat as a result of the addition. An overheated coil quite often causes damage to distributor and its amplifier. The high heat of a over-heated coil also increases engine bay temperatures to sad effect.

To counteract this distribution of energy, ignition systems were changed to use a 9v coil instead of a 12v coil. A 9v coil gives the same output as a 12v coil when provided with a 12v feed, resulting in a better spark for starting with less energy draw on the starter motor. Once the engine is running, the 12v feed is cut and the coil continues to run on the 9v feed.

Which coil should I use if my car has a ballast resistor?

Use a 9 volt coil. Never try to run a ballasted coil when a ballast resistor is not present in the ignition system! 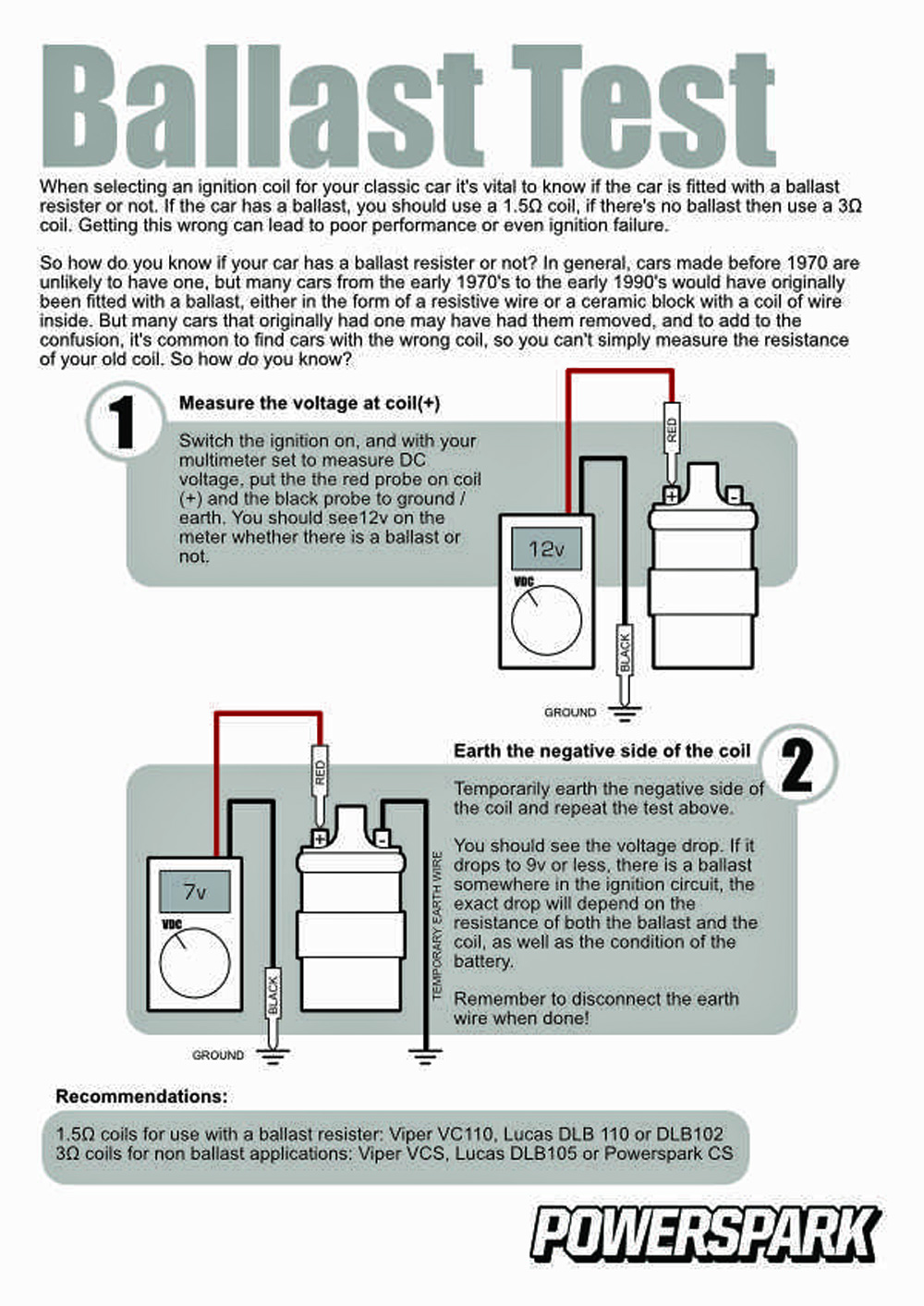 4. Maintenance. None. They should last forever

Cost & Availability  10-20 British pounds. Available at any auto store in the world.
Capacitor (aka a Condenser)

Though the end result is the same.  However, rather than being wired in series and reducing the battery voltage before it reaches the coil as a ballast resistor does, a capacitor/condenser DRAWS the unneeded voltage from the positive (+) coil post !

Maintenance. They should be changed every 2 years as they will fail without a warning sign. As noted above, they will then proceed to damage your distributor and its amplifier. They are even cheaper than ballast resistors, costing a couple of £s at most.  Sadly, Land Rover used them for a short period on LR and Morgan Plus 8s until they learned better. Frankly, the best idea to avoid inevitable sadness is to replace them with a ballast resistor. A one-pint job. Here is an excellent article more fully detailing the curse of a Lucas igntion coil condensor/capacitor.
Way of Testing a Capacitor Condenser

TEST ONE. 1.) Remove the condenser from the engine (or at least disconnect the lead wire). Note the small metal connector located on the end of the condenser. This connector is the "hot" or power connection. The metal case of the condenser is the grounding point. Discharge the condenser by shorting the lead wire to the case. 2.) Switch the meter to the ohms position. Place the red lead into the "ohm" connector on the meter. Insert the black lead into the "com" or common connector on the meter. Set the resistance range to the highest available setting (if it is selectable). Connect the test leads together and zero the meter. If the meter won't zero replace the battery. (Yes, an ohm meter has a battery).

3.) Touch the red lead to the hot connector on the condenser. Place the black lead to the metal case on the condenser. The meter's needle should jump slightly to the right (toward 0-ohms), then should drop back to the left towards infinite resistance). Hold the leads in place for 15 to 20 seconds. This action places charge in the condenser. If the test shows any reading other than infinity, the condenser is leaking and needs to be replaced. 4.) Remove the leads and reverse the placement to the condenser. Move the red lead from the hot connector to the metal case, and move the black lead from the metal case to the hot connector. At the moment where both leads are touching the correct points, the meter should jump towards the right. The second time the needle may move twice as far, as this action discharges the condenser. Holding the leads in contact should again result in movement of the needle back toward infinite resistance. 5.) Movement of the meter's needle indicates the condenser is good. If no movement was indicated on the meter in any circumstance, the condenser is bad and must be replaced. Retest the condenser several times for a consistent reading. In operation the condenser will "ring" at up to 300 volts, so the condenser/capacitor needs to be rated much higher, no less than 600 volts DC. The ignition will likely work with any capacitance value between 0.05 and 0.6 microfarad. Too high or too low value may eventually transfer metal from one side of the contact points to the other side leaving a pit and a point. Capacity of spark coil capacitors ranges from 0.2 microfarad to 0.33 microfarad. Almost all automotive coils use a 0.25-0.29 microfarad capacitor. A capacitor may absorb moisture over a long period of time, and moisture will cause failure of the condenser. So it is possible that a condenser stored for 10 years or so might be bad or might fail prematurely in service. It is a good idea to check your traveling spare condenser occasionally.